Want to go to a festival in Seville? A great idea! Seville is a city full of life and full of festivals of all musical genres. That's why in ForSevillaLovers we have created a list with the best festivals in Seville and that you can't miss. Let's check them out! 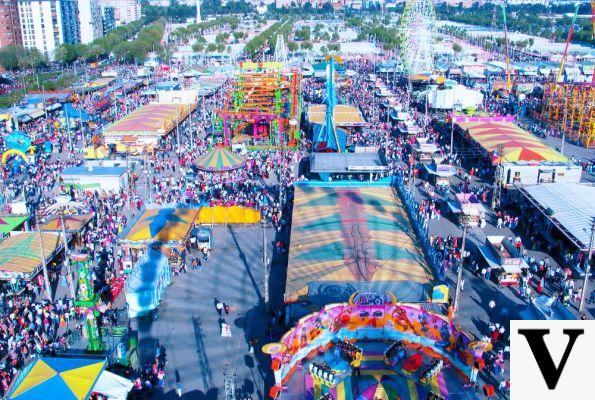 Want to go to a festival in Seville? A great idea! Seville is a city full of life and full of festivals of all musical genres. That's why in ForSevillaLovers we have created a list with the best festivals in Seville that you can't miss. Let's check them out!

In Seville there are great festivals, which are very felt by the inhabitants of Andalusia and attract many tourists every year. Among these the most important are undoubtedly the Semana Santa and the Feria de Abril, but also the other festivals, especially the religious ones, are very lively and exciting and their origins are very old. For the occasion it is absolutely normal to see men, women and young people wearing traditional Sevillian clothes, following the processions or while dancing and having fun.

The Feria de Abril takes place in El Real de la Feria, in the southwest of the city, in the second half of April, but its date depends on the date of Easter. The Feria, originally a livestock fair, is today the biggest and most characteristic popular festival in the whole region: the Feria usually starts on Monday at midnight and ends late on Sunday night. For a week the Sevillians dedicate themselves exclusively to the celebrations in the "casetas", to the local dances and songs, especially flamenco and sevillana, they eat, drink and have fun until dawn. During the day there are traditional carriage parades, with typical Andalusian costumes. In addition, at the fair, there is also a large amusement park for the entertainment of the little ones and, during the period of the Fair, the most important bullfights of the season are held in Seville.

The Pilgrimage of El Rocio is a religious festival that takes place in the small village of El Rocio, near Huelva de Almonte, but the nearby city of Seville and its inhabitants participate with devotion in the pilgrimage. The brotherhoods of the districts of Triana, El Salvador, La Macarena and El Cerro del Aguila leave a week before the festival to the village of El Rocío, where pilgrims from all over the region converge. The origin of the festival dates back to an ancient apparition of the Virgen del Rocío on an oak trunk and the construction of a hermitage in the area of Roina de Las Marismas. The pilgrimage is celebrated at the end of the week of Pentecost Sunday, fifty days after Easter.

In June the Corpus Christi procession takes place, thousands of faithful and devotees parade through the streets of Seville and go to the Cathedral to receive the Eucharist. The festival also continues for the next eight days, when the children of Seville, dressed in traditional costumes, celebrate the Body of Christ with songs and dances dating back to the 16th century.

Seville is the city of bullfighting, thousands of people follow their favourites throughout the bullfighting season.

The Seville European Film Festival was born in 2001 but has already enjoyed considerable international success both in terms of audience and participation of films and directors, thanks also to the collateral cultural activities of the festival itself, such as meetings with important personalities from the world of European cinema, seminars and concerts.

Security and crime in Seville ❯

What to see and do in Seville

The best Luxury Hotels in Seville