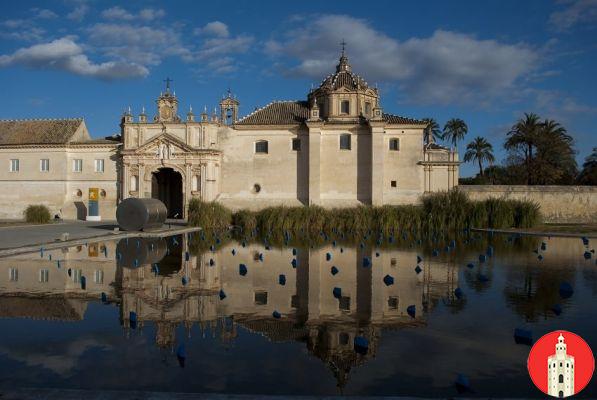 Il Cartuja Monastery located on the Isla de la Cartuja in Seville, it is also known as Monastero di Santa Maria of the Caves. The monastery was renovated on the occasion of the Expo of '92 and today it is also a fine arts museum.

History of the Cartuja Monastery

During the twelfth century the area where the Cartuja Monastery it was used for making pottery thanks to the abundance of clay present. This work was then continued by the inhabitants of Triana, the neighborhood of Seville, until according to legend they found an image of the Virgin Mary inside one of the caves and for this they built a small church of Santa Maria de las Cuevas.

Solo in 1400 the Monastery of the Virgin of the Caves was built thanks to Archbishop Gonzalo de Mena and to the financing of the Ribera family. The Order de los Cartujos was also established at the end of the 1810th century. In XNUMX during the invasion by the French the monastery was looted and all the decorations disappeared and the place was used as the headquarters of the French operations and the church was converted into a stable.

A few years after the Monastery of La Cartuja it becomes an English-style ceramic factory, all until 1982 when the factory had to change its location. The building was renovated on the occasion of the 1992 International Expo held in Seville and used as royal pavilion of Spain. In 1997, after a few years of disuse, it became the Andalusian Center of Contemporary Art and Museum of Contemporary Art of Seville.

What to see in the Cartuja Monastery?

Definitely worth a visit, the Cartuja Museum is one of the most interesting places in the city of Seville, it is located not far from the historic center and easily accessible. What to see inside the Monastery? Here is our selection:

Due to the past as a factory inside the Cartuja Monastery it is possible to meet ovens, industrial buildings and chimneys.

Inside the Monastery there is the Andalusian Center of Contemporary Art, also known as the contemporary art museum of Seville opened since 1997, inside you can see exhibitions of modern art and bizarre permanent works of art such as Alicia by Cristina Lucas, or a huge head and an arm that protrude from the two windows of the monastery, inspired (apparently) by Alice in Wonderland. Among other pieces bizarre we find Bus Stop a singular bus stop.

It is possible to visit the monastery and the art gallery at a cost of 3 euros for the complete visit (1,80 € per monument and exhibition) from Tuesday to Friday from 7 to 21, on Saturdays the entrance is free.

How to get to the Cartuja Monastery

To reach the Cartuja monastery located in Calle Américo Vespucio 2 you have to take bus c1 from the center of Seville, you can get more information by consulting the map below:

Hotel near the Cartuja Monastery

If you want to stay in the Monastero area you can search for a hotel using the form below, you will be offered the best hotels in the area based on quality and price:

add a comment of Cartuja Monastery: Museum of Contemporary Art of Seville