La gold tower in Seville it is one of the most important monuments of the city, built on the banks of the Guadalquivir river it had in the past the function of sighting and control of access to the city through the river. To date, together with the Giralda, is one of the most important legacies left by the Muslims during the domination of the region. The height of the structure is 36 meters and has a twelve-sided plan (twelve sides) and has three main sections.

Tower of gold Seville: the history

The tower was built in XIII Century by the Muslims, its name derives from the luster of the color that is reflected in the Guadalquivir river. The Tower was designed as a support for the defense system, becoming part of a real defense chain of the city together with the other towers (torre de plata and torre de bronze).

It was a key element during the Reconquista of Andalusia by the Catholic Monarchs, or the war that led to the reconquest of the Spanish land, Andalucia, to the detriment of the Arabs. In the sixteenth century, Peter I of Castile modified the structure by doing raise a turret to the top to the main structure, according to the legend it seems that the King made his lovers live here including: Maria Coronel and Donna Aldonza.

In 1755 the gold tower was damaged by a strong earthquake, even the Marquis of Monte Reale proposed the demolition of the structure. Fortunately, the citizens opposed it and it was restored. Some years later, in 1760 the structure was completed with a new turret, this time with a circular plan.


Over the years this tower was also used as a chapel dedicated to San Isidro, but also as a warehouse for the conservation of the wealth of the colonial empire and even as a prison.

The Tower of Gold - Naval Museum of Seville

After many renovations, to date the Torre del Oro in Seville is the main seat of the Naval Museum of the city. Here are kept all the finds and precious objects of the naval history of Seville. 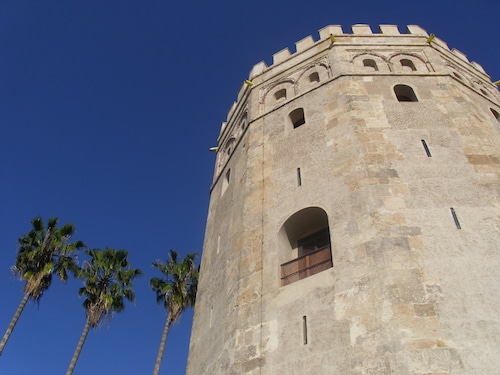 Today it is possible to access the Naval Museum for a visit, inside the structure you can find historical artifacts and pieces of the most important naval collection of the city, with key elements and historical documents that certify the colonial activity of Spain in America. On Mondays it is also possible to have an audio guide for € 2, to be added to the ticket price.

Hours of access to the Tower of Gold of Seville I'm:


How to reach the Torre dell'Oro?

The Naval Museum of Seville is located on Paseo Colon, in the Arenal district. It is possible to reach the hotel by taking the airport bus, or by underground getting off at Jerez Gate. At the exit of the metro tunnel it is possible to admire the Torre dell'Oro on the left. Here is the path to reach the point of interest in a simple way:

The Tower of Gold of Seville is one of the most important monuments and points of interest in all of Seville, it was built by the Muslims and modified over time.


Visit the Cathedral and the Giralda of Seville: tickets and curiosities ❯

add a comment of Tower of the Gold of Seville