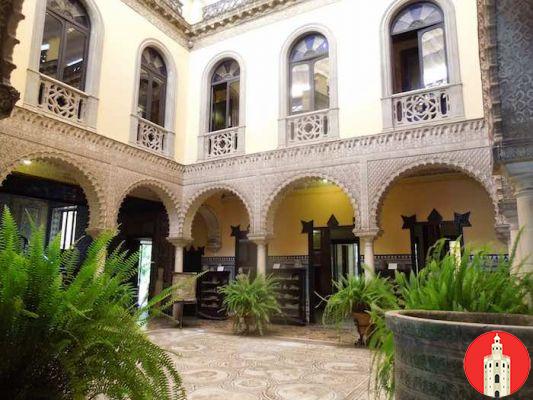 Il palace of the Countess of Lebrija it's definitely one of the must see attractions in Seville, but it is also one of the least known in Andalusia. It is a house that combines several architectural elements, from Roman mosaics, stuccoes in the Mudejares style, coffered ceilings and friezes dating back to the Renaissance period. The house is also divided into two floors: a winter and a summer area.

Palace of the Countess of Lebrija

It is a house dating back to the fifteenth century BC and rebuilt in the sixteenth and purchased by Countess of Lebrija Regla Majón at the end of 1800. The structure of the building respects the Sevillian style with a main patio where the house rises all around. In the center of this courtyard we find a Roman mosaic with star medallions, flowers and various mythological motifs depicting Leda and the Swan, Europe, Ganymeda watering the eagle. 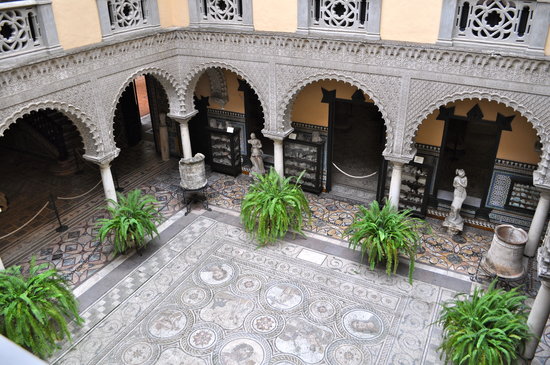 Lebrija Palace is one of the best houses in the whole city, rich in mosaics and architectural styles dating back to various eras and a series of rooms with archaeological remains inside such as vases, amphorae, columns and sculptures that have an inestimable value. There are 580 square meters of Roman mosaic, floor and decorated walls that convert it all into the most important collection of its kind in the world.

The whole villa it is rich in decorative elements such as Arabic style arches, with silver decorations. The floor plan of the building has a typically Andalusian style.

This residence was also defined as the "best paved palace in all of Europe”By the Marquis Lozolla, general director of Fine Arts.

Inside the palace there are numerous mosaics that were found in Italica, a Roman colony in Spain, these were acquired by the countess in 1914. Among the most important we find the mosaic of the god Pan. There are numerous sculptures and statues dating back to Roman and Greek times and two representations of the God of the Sun Apollo and the Goddess Diana.

The cultural heritage kept inside the building of the Countess of Lebrija does not concern only the Roman and Greek era, but there are numerous decorative elements that trace the Arab and Persian style, these can be seen inside the patio full of floors of fine marble.

To access the second floor it is necessary to use a staircase that was built in the 4000th century, here you can admire a series of paintings by Van Dick, Escluela de Murillo and a Sorolla. On the upper floor of the house there is a library with over XNUMX books dating back to different eras.

The construction of the palace of the Countess of Lebrija dates back to the 1901th century, it was bought only in XNUMX by Mrs. Regla Manjón Mergelina, the restoration of the building lasted about 13 years and during the latter it was enriched with works of art and treasures. The present mosaic dates back to the Roman era.


The building from 1901 to today has never changed owners, in 1999 el Palace of the Contesa de Lebrija it has become a public museum that can be visited or, on some occasions, rented for events.

Visiting hours and days of the Countess of Lebrija palace museum

Following a series of restorations, the building can be fully visited and is open to the public. The palace is located in Cuna Street, 8 and it is possible to visit it at different times of the year:

Entrance ticket to the Countess of Lebrija Museum

It is possible to visit the building of the Countess of Lebrija at the times and days indicated above, but how much does it cost to enter for a visit? Here are the prices:

Curiosities about the Palace

It is possible to rent the halls and the patio of the Palace of the Countess of Lebrija for events such as dinners, conferences, concerts, presentations, etc. The maximum capacity is 150 person.

Visiting the Palace of the Countess of Lebrija: guide

We have decided to help you with some tips and advice on how to visit the palace and above all some useful information that may interest you.

The visit to the palace must undoubtedly start from ground floor here we will find two splendid gardens in full Andalusian style that will leave you speechless: The Patio Central and the Patio de Las Palmeras (Courtyard of the Palms). In the first we will find mighty Moorish-style marble columns that recall theAlcazar or l 'Alhambra of Granada, as well as floors with mosaics and precious marble.

Also on the first floor we find the Mosaic of the God Pan, the latter was brought from the nearby city of Italica purchased in 1914 by the Countess and is one of the most beautiful and interesting works in the building.

In the Cortile delle Palme we find columns and arches with a completely different style from the previous one, but at the same time it represents one of the sevillanos patios with a terracotta floor, plants and columns in ocher yellow.

In addition to the various courtyards on the first floor, it is possible to visit the various rooms of the building with inside a series of works of art collected over time by the Countess. We suggest you visit the Ocavada Room and the Salon de Hermes, in the latter you can see a headless statue of Apollo or Hermes.

Once the visit to the ground floor is over, we move on to the first floor. The mighty staircase will surprise you, some will remind you Plaza of Spain, in fact it is in full Andalusian-Spanish style. The ceiling of the staircase comes from the Hall of the Doge's Palace in di Marchena (a small town near Seville) and on the azulejos walls.

Arrived on the first floor we find the Dining room, a place where marble, porcelain, silk, wood and other elements are correctly put together giving an elegant and unique appearance. Then there is the Canton Hall where we find the painting by Van Dyck and the works of the Murillo school.

We also suggest you visit theOratory where you will find the altar dedicated to Christ, the latter is made of Filipino ivory from the 700s. Also on the first floor, finally, we find the Arabian Hall that will transport you to Arabia with sofas, cushions, canvases and finely decorated furniture in Arabian style.

Do not miss the Library in the Palace of the Countess of Lebrija which houses over 4000 books.

The Triana Market in Seville ❯