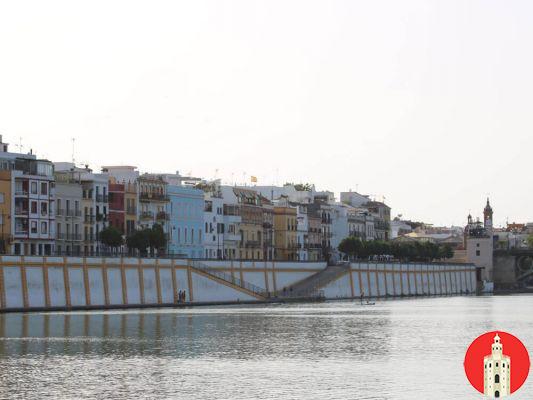 Visit Triana, it does not mean seeing monuments, but experiencing the essence of Seville. The Triana district, in fact, does not presume of tourist goods but of aunique and truly authentic atmosphere, despite the location a few steps from the center of Seville and the tourist massification. 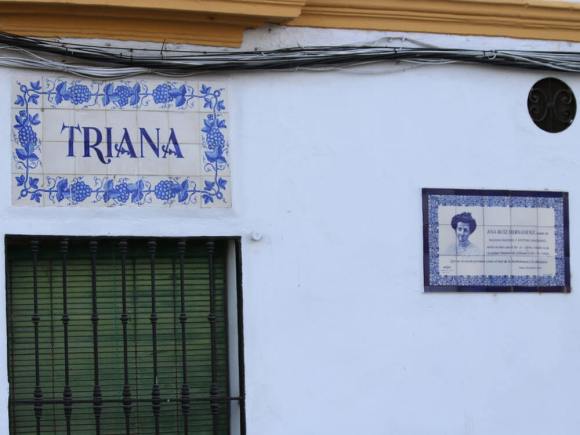 The name of Triana has some authority in Seville. It is a neighborhood that still inspires respect among the Sevillians themselves, precisely because it was capable of safeguard their traditions and those of the city. This will be due to the fact that they are just on the other side of the river or because even today the inhabitants of Triana do not consider themselves Sevillians, but "of Triana". It has always been a popular district, of craftsmen, of sailors, of potters, of humble people. Humble as well as a part of the gypsy population who lived in these areas, even if it is certainly not to be believed that this was a gypsy barrio such as the Sacromonte of Granada. This lively atmosphere was there cradle of various artists such as flamenco dancers or singers and bullfighters. 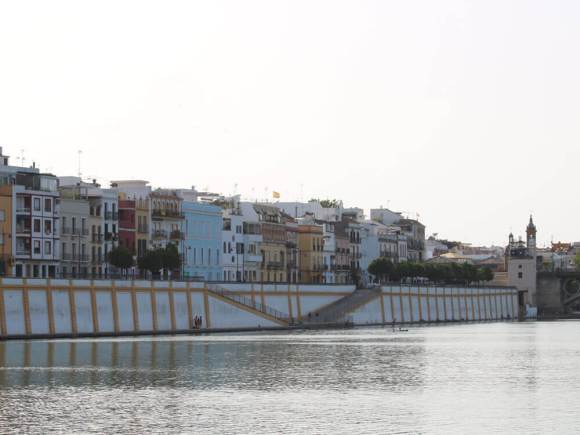 Triana seen from the opposite side of the river.

The Triana bridge: the first thing to see in Triana

The Triana bridge is the symbol of the neighborhood. Also called Puente de Isabel II, it is a work from 1845 - 1852 iron, the oldest in iron in all of Spain. This was designed by Eiffel's disciples and replaced the old bridge made of wooden boats that was used to cross the Guadalquivir and connect the Triana district with the center. 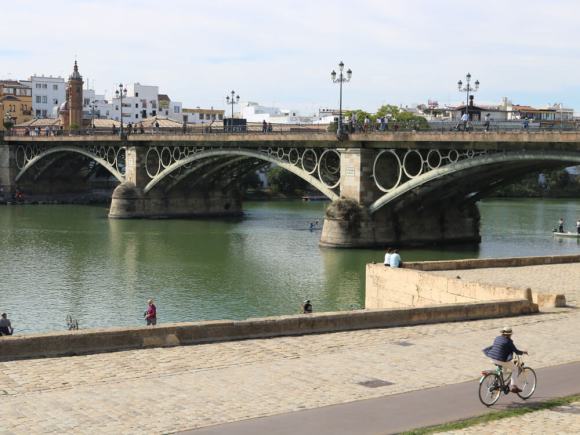 The market is one of the things to see in Triana. Although some stalls have now lost the essence of the village and have allowed themselves to be enchanted by the occasion of tourists, many others remain authentic, as well as the bars that we find inside the Plaza de Abastos. Unique scents, colors and sounds that will immerse you in a flash genuine spirit of Triana. The building that houses the market is located next to the Triana Bridge and above the remains of the San Jorge Castle. 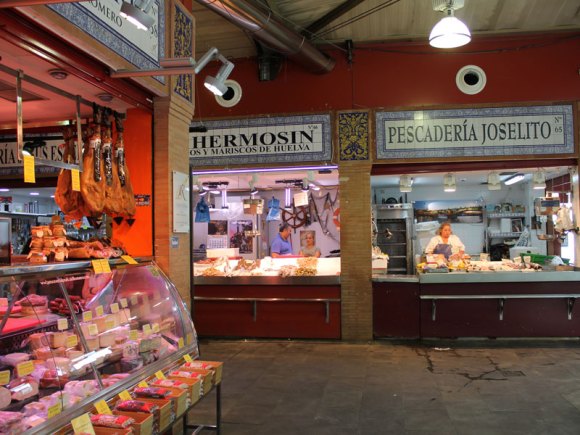 The Castle of San Jorge

The entrance of the San Jorge Castle it is right off the market, going down a floor. The Castle was of Muslim origin, although it was of great importance during theSpanish Inquisition. On the tour of the interior we can see models of the Castle, photographs, drawings and explanatory videos on the monument.
Among the remains stand out the wall, together with the personal effects of the inhabitants of the castle. We will also find parts of the chapel and prisons. 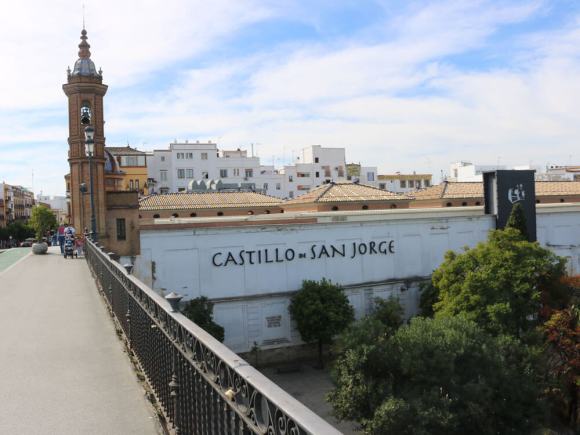 The Castle of San Jorge.

Still in the same area of ​​the market and the Triana bridge, one will be easily identifiable very original chapel, that of the Virgen del Carmen. The style will undoubtedly call us attention since the architect is the same as the Plaza de España, that is Aníbal González. 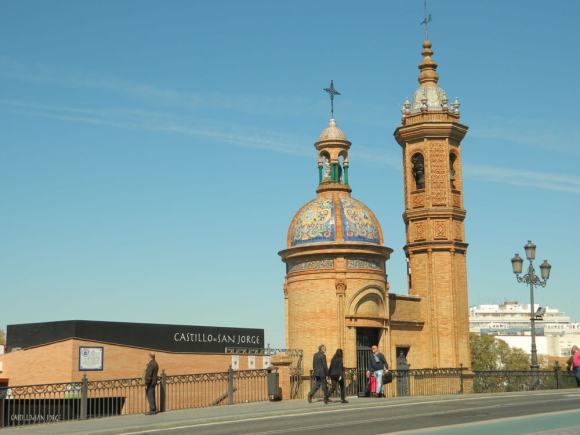 Crossing the Triana Bridge you arrive at the Plaza del Altozano, the neuralgic point of the neighborhood. From here various important routes branch off such as the pedestrian Calle San Jacinto, Calle Bétis or the alleys of the potters. In this square, in addition to observing the market and the beautiful mansions that compose it, you can see two statues: one of bullfighter Juan Belmonte it's a dedicated to the art of flamenco. The first sculpture has the particularity of being empty right in the chest. If you look carefully through the crack in the direction of the center we will see how the Giralda fits perfectly. 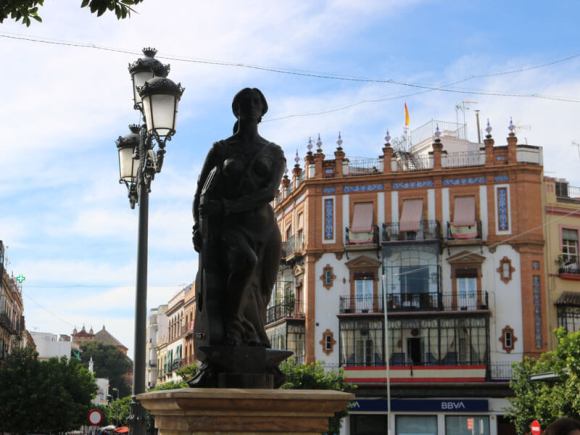 Calle Bétis: where to go out in Triana

One of the streets with the greatest "nightlife" in Seville is certainly the Betis Street along the banks of Triana del Guadalquivir. In a few meters they are concentrated various restaurants, bars and pubs where you can dine, toast or otherwise have a chat with a spectacular view. It is one of the busiest areas of Seville in the evening and this is also where the fantastic Velà de Santa Ana is celebrated in August.

See also -> Where to go out in the evening in Seville 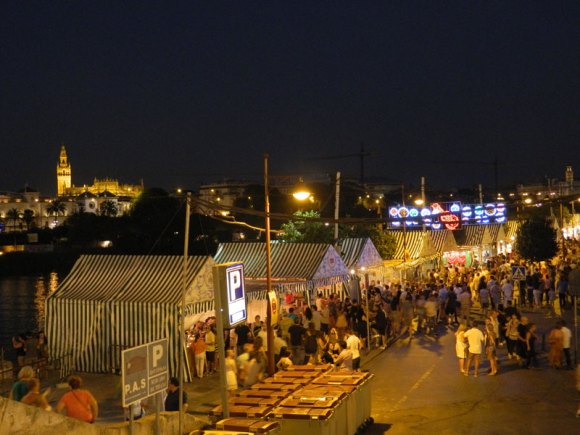 The Church of Sant'Anna: the Cathedral of Triana

It is also known as the Triana Cathedral, although the dimensions are certainly not comparable to that which houses the Giralda. However, the importance for their own parish for the inhabitants of Triana is comparable to that of the Sevillians for their own Cathedral. The Church of Sant'Anna is in Gothic-Mudejar style from 1266 and despite the many restorations it is certainly worth a visit. to meet her you will finally have to enter the typical streets of Triana which are the true essence of this idealized neighborhood. 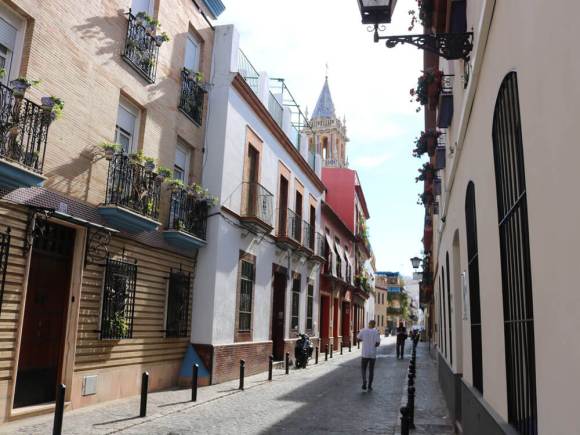 Among the alleys, the Church of Santa Anna.

The ceramic museum of Triana

As is well known, the Triana neighborhood it is known throughout the country for the production of its own pottery and above all the azulejos, or tiles. In this center, besides being able to see an exhibition of the works made in this area of ​​the city, we will be able to see the remains of the old ovens where the ceramics were used for cooking. A fairly new museum absolutely to see in Triana. 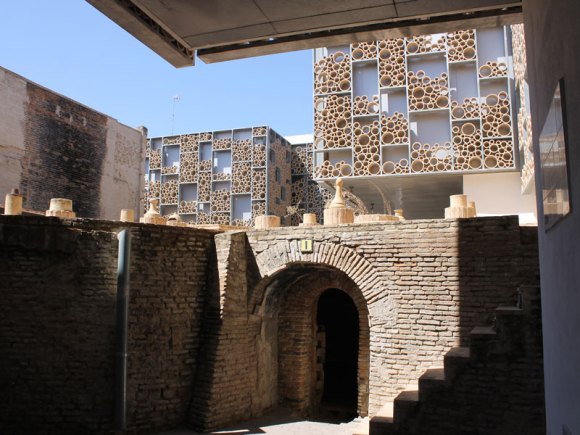 The ceramic museum of Triana.

The streets of the potters: streets absolutely to see in Triana

A series of alleys where we can find dozens of atelier of potters and ceramic artisans. In these premises, we will not only be able to buy the famous tiles of the Triana district, but also to observe a real laboratory. Especially in the via Alfareria, or ceramics, we can see many historical examples. An alley to go through and which will lead us to the Torre Sevilla or Torre Pelli. 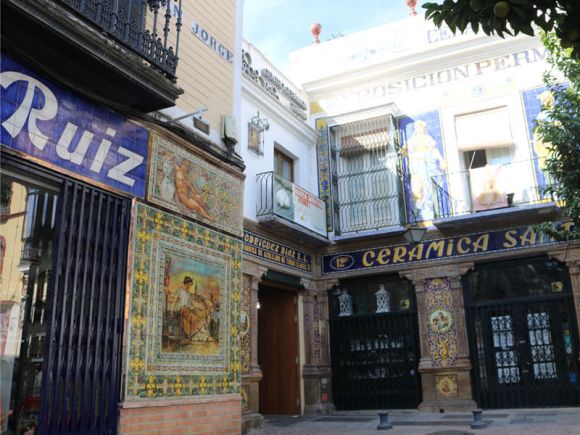 If Calle Betis shows us the funniest atmosphere of the Guadalquivir bank from the Triana side, in Art Walk and the next Paseo de la O we will be able to enjoy a relaxing walk. In the first section almost every Saturday and Sunday we will find a craft market very nice, later, however, we will find a very pleasant riverside with some places where you can drink a beer or have breakfast in the sun. 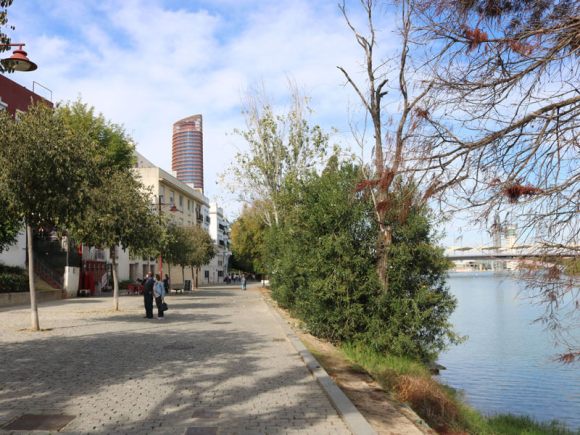 Il Alley of the Inquisition

It is a tight passage to see in Triana which goes from the Paseo de la O, or the river bank, to almost the Plaza del Altozano. The name derives from the fact that it is adjacent to the Castle of San Jorge, one of the most important places in theSpanish Inquisition in Seville. This little street is a magical place, where you can take one of the most representative photos of Triana. 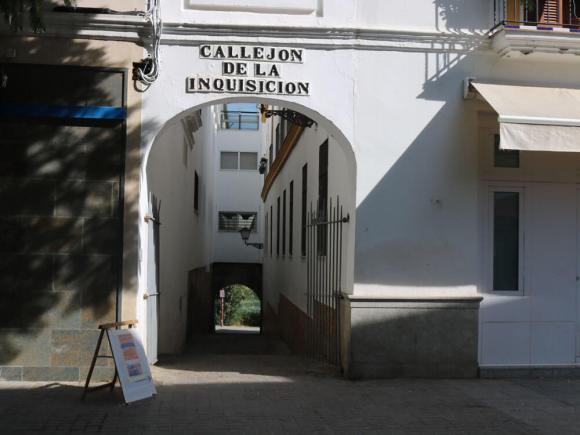 The passage of the inquisition.

One of the novelties of the Triana neighborhood is the Torre Sevilla or Torre Pelli, the tallest building in the city. In addition to the now emblematic tower of the city which houses offices, a hotel and a restaurant, in this area we can take a tour of shopping center placed at the foot of the majestic building. Here we will find the most interesting brands including Primark and Fnac. In addition to shopping, however, at the foot of the Torre Sevilla, we can enrich our culture by visiting the Forum Box, a museum that always has very interesting time exhibits. 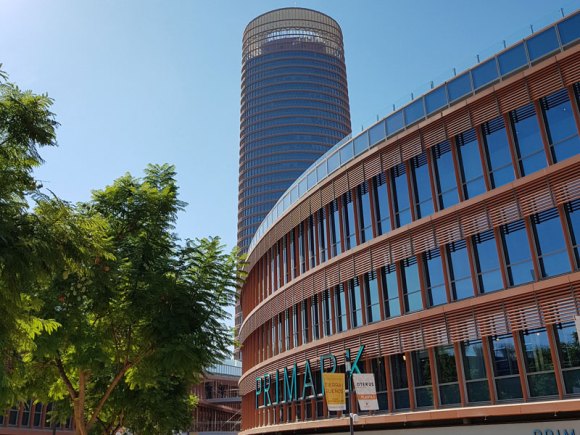 The CAAC in the Monastery of la Cartuja

Il CAAC, or the Andalusian Center of Contemporary Art it is already located outside the Triana district, but very close to the Torre Sevilla. For this it is definitely worth a visit. This museum is not only interesting for its works, but also because the center is inserted inside one ancient pottery factory which in turn was a monastery. All this extended in one beautiful park. A really cool setting and among the best things to do in Triana. 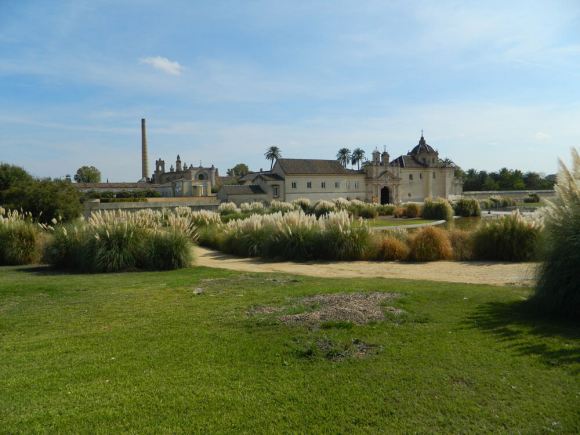 Where to see flamenco in Triana

One of the emblematic places to see flamenco in Seville is the Anselma House, a few steps from the Altozano square. Here you will be able to enjoy live flamenco shows for free, between a beer and another. A very folkloric place where you can experience the essence of the neighborhood in just one night. 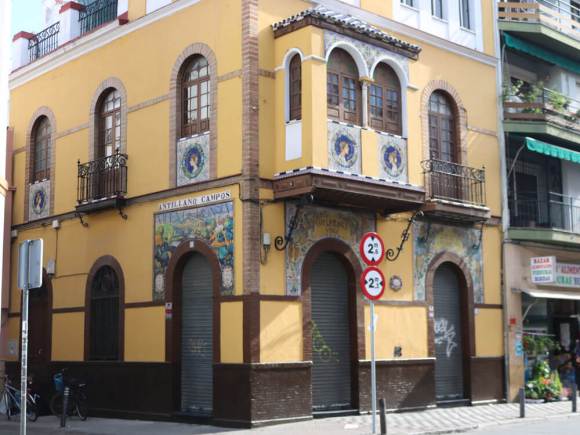 Where to eat in Triana

In Triana we still find several authentic and traditional places where you can eat the famous Sevillian tapas. Undoubtedly, there are:

See also -> Where to eat tapas in Seville 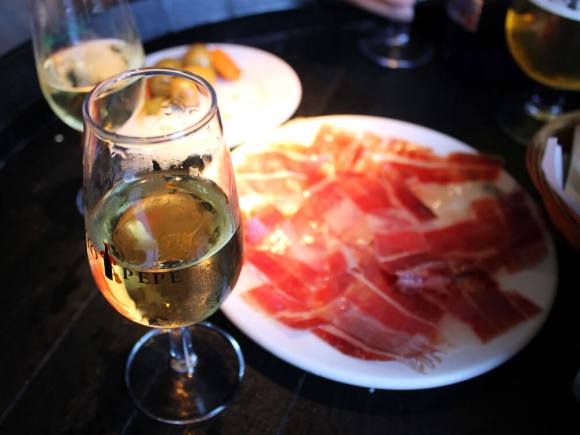 Ham and came to Triana.

Where sleeping in Triana

In Triana we now find many accommodations, both hotels and apartments. Here we can find the hotel with the best view of Seville in the Torre Sevilla, or hotels closest to the Triana bridge, very convenient for visiting the city center on foot.

The view from the Torre Sevilla.

What to see in Triana (Seville):

What to see in Seville in 1 day ❯

add a comment of What to see in Triana: a genuine experience in Seville