What to see and do in Seville

Do you want to travel to Seville? It's a great idea! This great city offers great architecture and unique corners where you will live a unique experience. Visit its cathedral, its wonderful Plaza España and its giralda. At ForSevillaLovers we have created a list with all the thingsto see and activities to do in Seville that will make your visit unique. You will love it! 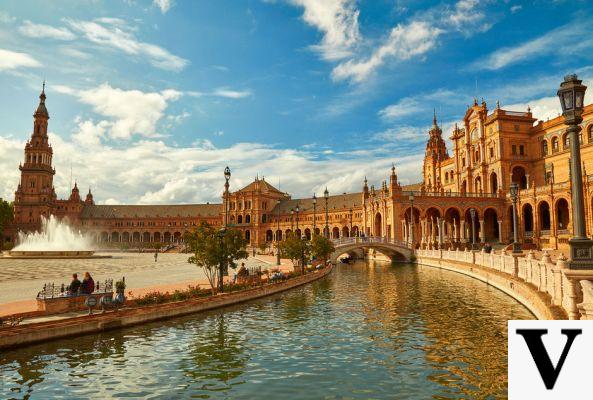 Want to travel to Seville? It's a great idea! This great city offers great architecture and unique corners where you will live a unique experience. Visit its cathedral, its wonderful Plaza España and its Giralda. At ForSevillaLovers we have created a list with all the things to see and activities to do in Seville that will make your visit unique. You will love it!

What to see in Seville

Seville is flamenco, tapas, bullfighting, fiestas, everything that embodies the essence of Spain. You will discover the old quarters with their narrow streets, the tranquility of the parks and the joy of the people that reveals itself especially during the festivals for which the Andalusian capital is famous. Seville has an architectural heritage of great value, the Cathedral, the Giralda and the Reales Alcazares are an example, but it is advisable to visit the city in the milder seasons, so as not to swelter in the heat.

The Reales Alcazares (Royal Palaces) are the most impressive monuments in Seville. Characteristic of these buildings is the mixture of styles and decorations, ranging from Islamic to neoclassical.

The Alcazàr, a former Moorish fortress, is a great example of Mudejar architecture with halls, courtyards and gardens that create a fascinating combination of colours. Next to the Alcazar is the Palace of Charles V which houses an important collection of tapestries depicting the king's conquest of Tunisia. From the Palace you can go directly to the Alcazar Gardens where the Moorish style has been combined with the Moorish style to create a fascinating combination of colours.


The Cathedral of Seville

Gothic and Renaissance styles come together in the most impressive monument in the Christian world after St. Peter's Basilica: the Cathedral of Santa Maria in Seville.

It consists of five internal naves, in Gothic style, and two chapels, the Royal Chapel and the Main Chapel. The former is crowned by a Renaissance dome; the latter contains paintings depicting scenes from the life of Christ and the Virgin. The Cathedral was built on the site of the Great Mosque, demolished in the 15th century, and of the old construction only the Giralda and some remains of the Patio de los Narajos are preserved.

The Giralda of Seville

The Giralda, emblem of the Andalusian capital, is the bell tower of the Cathedral: a monument of 96 meters high that fully reflects the style of the Almohads, rigid in religious matters and enemies of luxury, in the combination of monumental grandeur with refined simplicity.

The Giralda owes its name to the statue of Faith (called Giraldillo) that dominates it and turns on itself according to the direction of the wind. From inside the Cathedral you can access a platform, located at the top of the tower, from which you can admire the whole city from above.

The Triana quarter of Seville

The western bank of the Guadalquivir River is home to the characteristic district of Triana, where the old city and the modern city coexist. Triana was originally a neighbourhood of sailors, workers, industrialists and potters, and even today, entering the neighbourhood, you can still buy handmade pottery in the workshops. The riverside, on the other hand, which stretches from the San Telmo bridge to the Isabel II bridge, is a concentration of trendy bars and restaurants that offer a good opportunity to have fun at night. Another feature of Triana is the covered market where it is possible to admire the remains of the Arab and Roman civilizations.


The San Bartolomé quarter of Seville

Baroque, Gothic and Renaissance styles interpenetrate in the elements that make up the Barrio de San Bartolomé. From the Church of Santa Maria la Blanca, through the Plaza de San Francisco, through the Casa de Pilatos, through the Church of Santa Magdalena, an intertwining of different styles make the charm of this neighborhood. San Bartolomé with its labyrinth of narrow streets surrounded by old low houses, is a lonely and quiet place, ideal for long and quiet walks. Although the Barrio is not a popular destination for Sevillian tourism, it actually retains all the authenticity of the city.

The Plaza de España, within the Parque de María Luisa, was built in 1929 for the Ibero-American Exposition, based on a project by the Sevillian artist González.

Decorated with bricks, ceramics and coloured marble, the square has a particular symbolism of its own: the semicircular shape recalls Spain's embrace of its new colonies; the 58 seats represent all the Spanish provinces; the Spanish Palace inside, imposing and proud, represents the prestige of the Spanish world power; finally, the Plaza de España looks towards the river, the route to follow to reach America.

The House of Pilate in Seville

The Casa di Pilato is a masterpiece of 15th century Renaissance art, commissioned by Don Fadrique and perhaps inspired by the house of Pontius Pilate in Jerusalem.

Legend has it that the marquis realized that the distance between his house and the nearest church was the same as the distance between Pontius Pilate's residence and the place where Jesus was crucified. He then decided to place the 14 Stations of the Cross along the route, the first of which (the trial of Jesus) coincided with his house. That is why it was believed that his palace was also a copy of Pilate's residence. The 1533 building is a successful mixture of Renaissance, Flamboyant Gothic and Mudejar styles and has a beautiful courtyard of 24 arches with busts of Caesar, Roman statues or walls decorated in Mudejar style. The garden is also beautiful.

What to do in Seville

Where to sleep in Seville

Being a very popular tourist destination, a must during a tour of Andalusia, Seville has an excellent accommodation capacity. Depending on the type of accommodation you prefer and the budget you want to spend, the city has hotels, hostels, apartments or luxury rooms both cheap and extra.

When booking your holiday in Seville, remember that autumn and spring are the high season, but the Andalusian capital is beautiful to visit and experience at any time of the year. Every corner of Seville is worth exploring, the well-known and lesser-known places have a charm worth discovering.

Andalusia tour: how to organize a trip to southern Spain

Isla Magica Seville: info, prices and how to get there

Casa Pilatos Seville: Timetables, information and how to get there

add a comment of What to see and do in Seville