Visit the Cathedral and the Giralda of Seville: tickets and curiosities 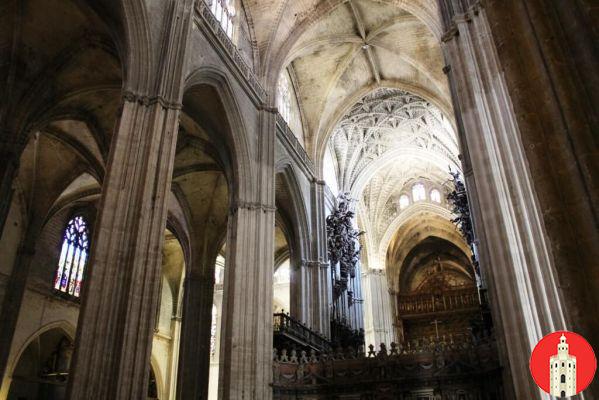 The first thing we have to to visit in Seville are the Cathedral and the Giralda. It is advisable to see the Cathedral and the Giralda by buying a ticket that includes a guided tour to understand practically what is the history of Seville. Below, however, I will try to summarize the history, curiosities and everything about these monuments in order to be able to visit them on your own.

The Cathedral of Seville wanted to be themost impressive Christian building in the world. With queste parole "Let's do such a great work that future generations will take us for crazy" l'autorità ecclesiastica di Seville decided, in 1401, to reform theancient almohad grand mosque (consecrated Christian after the Christian reconquest of Fernando III) which now survived in a bad state after the earthquake of 1356. The religious complex, today Unesco World Heritage, it measures 160 meters from north to south and 145 meters from east to west. Only the body of the Cathedral has a size of 145 meters x 76 meters and has 26 side rooms. Here you can consult timetables and fares.

-> Book your guided tour of the Cathedral, the Giralda and the Alcázar with a guide

-> Book a guided tour of the Cathedral and the Giralda 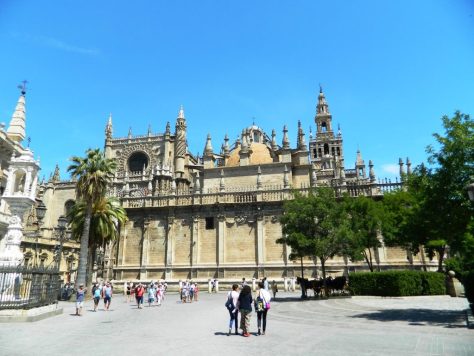 What to see in the Cathedral of Seville 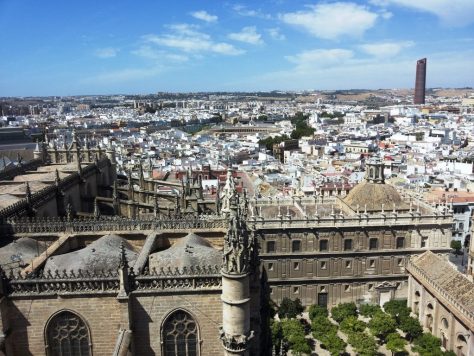 The immensity of the cathedral. On the right you can appreciate the Patio de los Naranjos.

The construction of the Seville Cathedral it lasted about 125 years for which, as often happens, the styles overlapped, from the original almhoade of the mosque al Gothic of the fifteenth and sixteenth centuries. 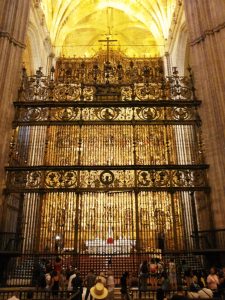 The High Altar of the Seville Cathedral.

The interior of the church occupies a monumental rectangle which includes five aisles which develop in an east-west direction, with numerous adjacent chapels. All this is supported by sixty columns. In Cappella Maggiore the altarpiece in which the patron saint Santa María de la Sede is located among forty-four gilded panels carved by Spanish and Flemish artists between 1428 and 1564. 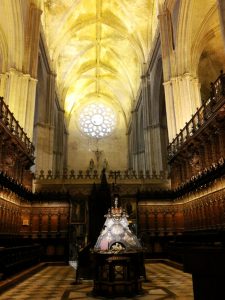 The precious wooden armchairs of the choir.

This masterpiece is protected by a beautiful e mighty cleared of iron, forged between 1518 and 1532. The choir, on the other hand, contains 117 precious wooden armchairs manufactured in 1478.

Among lots of works of art that adorn the various chapels, to be mentioned are above all those contained in the Chapter Hall and in the Major Sacristy. 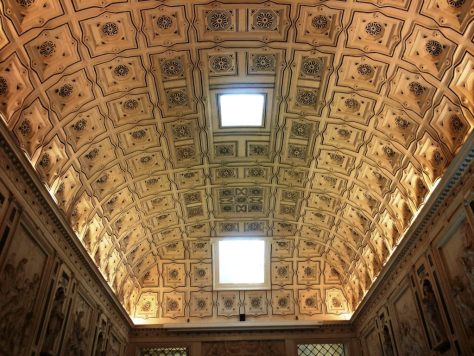 The beautiful ceiling of the Antecabildo. 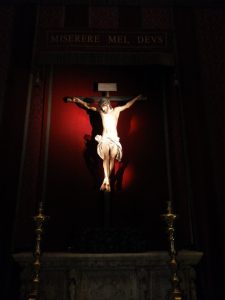 The Christ of Clemency by Juan Martínez Montañés.

La Chapter room and the Antecabildo are Renaissance jewels made by Hernán Ruiz II (the same one that the Giralda finished) in the XNUMXth century. There Major Sacristyinstead, it was designed in 1528, it has an impressive and original dome. This space preserves magnificent treasures such as the "Alfonsíes Tables" and the Great Custody. The latter is a work by Juan de Arfe from 1587, it measures over three meters and was built to expose the Blessed Sacrament during Corpus Domini. 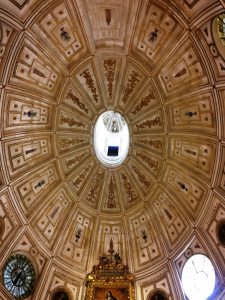 The dome of the Chapter House.

In the two spaces there are works of art such as San Isidro and San Leandro di Murillo, Justa and Rufina di Goya, Santa Teresa di Zurbarán and Immaculate Conception says Martinez Montanes. Seville Cathedral is also home to one of the Tombs of Christopher Columbus (others are present in the American continent). That of Seville was built in 1890 and represents the kingdoms of Castile, León, Aragon and Navarre supporting the coffin of the Genoese explorer.

Especially atexternal you can appreciate the details of Muslim origin of the complex, such as the courtyard of the oranges (Patio de los Naranjos), the Puerta de Perdón e la Giralda. Il Patio de los Naranjos preserves the Almohad hydraulic infrastructure. La fountainin fact, it was used by Muslim believers to wash their hands and feet before prayer. The exterior of the complex is fenced with a chain supported by Roman columns coming from the nearby Roman citadel of Italica. 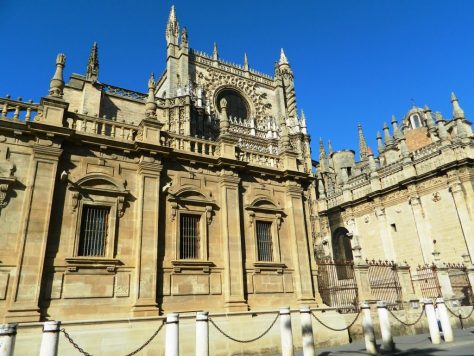 The exterior of the Cathedral. In the foreground you can see the Roman columns of Itálica.

La Door of Forgiveness it is an original element of the ancient mosque (the main entrance of the mosque). Some verses of the Koran and two Renaissance statues (St. Peter and St. Paul) adorn the entrance door. There are nine gates from different periods that surround the complex. Among these the most important are that of Perdón, the main one overlooking the Plaza de la Virgen de los Reyes and those of the Assumption e of the Baptism post lungo l'Avenida Constitución. 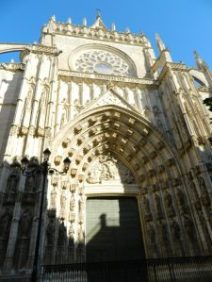 The Puerta de la Asunción in gothic style from 1833. 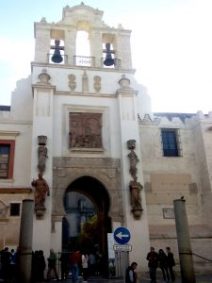 The Giralda of Seville

Il bell tower of the Cathedral of Seville is called Giralda and derives from the renovation of the ancient minaret of the mosque. This tower, in fact, was built between 1184 and 1198 by "copying" the Kutubiyya towers of Marrakech and Hassan of Rabat. Originally the Sevillian minaret culminating in golden apples. Many of the columns and capitals that adorn this fantastic work, however, come from the Cordobese city of Medina Azahara. An earthquake in 1365, however, destroyed part of the summit. 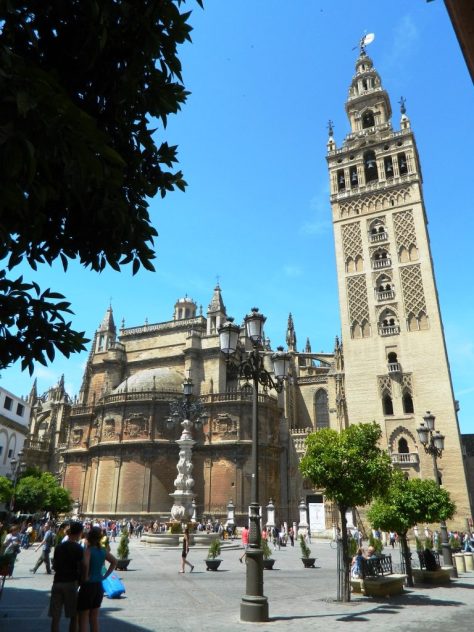 The immensity of the Giralda.

The ancient minaret, now a bell tower, is tall 104 meters (see 5 things you didn't know about Seville) and is made up of 35 ramp wide enough for a horse-drawn cart to pass. This was used by the muezzin to climb to the top to sing the daily prayers. On the top they are placed 24 bells, 18 flying and 6 fixed with dropping clapper. 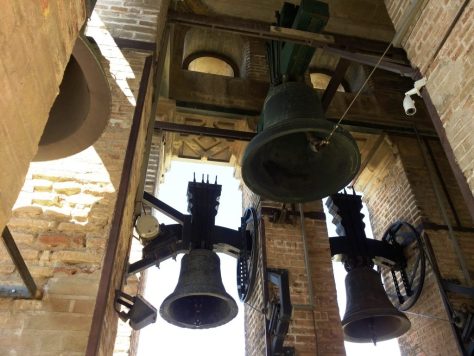 The bells of the Giralda. 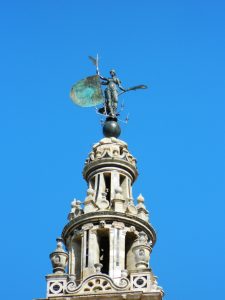 The statue of Giraldillo culminates the bell tower.

In 1558 he was commissioned Hernán Ruiz II to renovate the tower and rebuild the top. Ten years after the commission, tower one appeared culminating bronze sculpture in representation of the Fede. This veil of over 3 meters, turning with the wind, soon gave the name to the entire tower Giralda and appropriated the denomination Giraldillo. A replica of the Giraldillo is placed outside the complex.

Where to sleep in the center of Seville

Despite its beauty and authenticity, the historic center of Seville offers various accommodation options. Here you will find all the hotels, lodges and holiday homes on offer near the Cathedral of Seville. Below, however, all the offers in the city:

The 9 best monuments of Seville

What to see in Seville

add a comment of Visit the Cathedral and the Giralda of Seville: tickets and curiosities