All information about Seville Airport, flights, timetables, transfers from the airport to the center and the best hotels in the area where to stay, discover the tips.

Below are all the arrival and departure times frominternational airport of the city of Seville.

Seville Airport, San Pablo airport, is 12 kilometers from the city, very close and reaching it is really easy, there is indeed a bus that runs through Seville - Airport or Airport - Seville at a price of around 2 euros per way. It is possible to reach the city center, or vice versa, using the Taxi service at a fixed rate (35 euros).

The airfield was built by Rafael Moneo (architects), and is a structure that fully respects the architectural style of the city and the region of Andalusia. Seville airport was built in 1940, then in 1989 a second terminal was added and later in 1991 also a new control tower. The boom at San Pablo Airport occurred in 1992, and since then air traffic has increased year on year.

Seville airport is one of the main in the region along with that of Malaga, and there are plenty of flights too low cost airlines which reach most of the major European cities.

During the summer season Seville airport increases the number of flights and routes, thus expanding air traffic and opening up to numerous other destinations. During the summer it is possible to reach Seville directly from Bari and Naples, the main cities of southern Italy.

All'interno del San PabloAt the moment, it is not possible to go shopping, at least not like what you can do in the Rome Fiumicino airport, Paris and the other larger ones, you can only buy some souvenirs, have a coffee in a bar or eat something.

Seville airport it is equipped with a large, very cheap and advantageous car park, both in terms of distance from the aerodrome itself and for convenience. The "fast" fare to accompany or pick up passengers is € 1 for half an hour, and the parking platform has direct access to both the departure and arrival terminals. 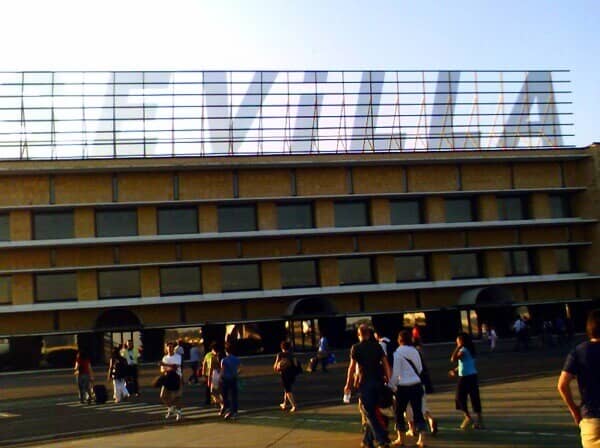 San Pablo airport in Seville is one of the main in the region and there are numerous low cost flights from various companies, such as Ryanair, Easyjet and Vueling. The central position favors the reaching of the city, and has allowed Seville to expand also internationally.

There are also other airports nearby, a 90 km we find that of Jerez that with Ryanair flies only to Barcelona El Praat and London, while there are other connections with Vueling and Iberia.

At about 200 km we find, instead, theMalaga airport, and at the same distance that of Granada, the former offers many more solutions than those ofSeville Airport. It is possible to reach the city ​​of Malaga very efficiently it is possible to use the train or bus.

Madrid airport is located about 600km away and can also be reached by fast train (AVE) in about 2h and 45 minutes.

This is all there is to know about Seville airport, for more information you can contact the following numbers:

Customer attention is only in Spanish or English, it is not available in Italian.

How to get to Seville airport

However here some additional information:

There is a bus service that connects the city center from 6.15 am until 23.00 pm, departures are every 30 minutes. The main stops in the city are there Santa Justa and Puerta Jerez train station. There are several stops along the way that we invite you to read in the dedicated article.

Another solution to reach the airport are taxis that can be taken in various points of the city with a fixed rate of € 35.

Hire car to get to the airport in Seville

Another solution is through car rentals, there are various agencies inside the Seville airport, you can find them on the ground floor in the main terminal.

Transfer from / to Seville airport

Another solution is the private transfer to and from Seville airport, there are different solutions and different price ranges. We suggest you take a look at those proposals below, they are among the best solutions.

If you have a stopover and want to sleep near the Seville airport there are several facilities, below are those recommended for you sleep and rest near the airport.

Where to eat in Seville ❯

Getting around in Seville

How to get around Seville

How to get to Seville by train

add a comment of Seville Airport: 12 km from the city center