Isla Magica Seville: info, prices and how to get there 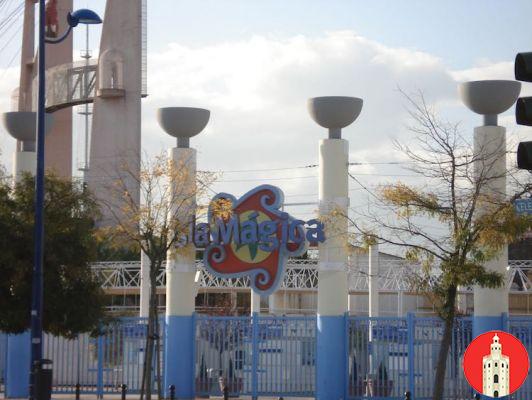 When it comes to Seville, many think of folklore, traditions, history: but here there is also a amusement park which is among the largest in all of Spain. We are talking about the Isla Magica of Seville, a very famous and much loved theme park. If you are planning a trip to beautiful Andalusia, don't miss the opportunity to have fun!

As pointed out, that ofIsla Magica is one of the largest amusement parks in the whole nation and to find it just go a little outside Seville, in theCartuja Island to be precise. Before going into detail and presenting the park, it must be said that this was born in an area of ​​the vast area that, in 1992, was affected by the Expo. In this way, therefore, sheds and a lake that had been specially created for the event and which should have been dismantled were converted and exploited. It is therefore an excellent example of the reconversion of a pre-existing work which, most likely, would have remained unused.

The first thing that strikes you about this park is the location: the Isla Magica can also be easily reached from the city center and is not far from all the major hotels in the center. You can also get there on foot, or by taking public transport if you wish.

What can be found in Isla Magica

Another feature of the park in question is that it is very well structured. As mentioned at the beginning, in the center of it is the lake, which was recovered from Expo 1992, and everything else develops around it. There are eight thematic areas divided by name and themed attractions. 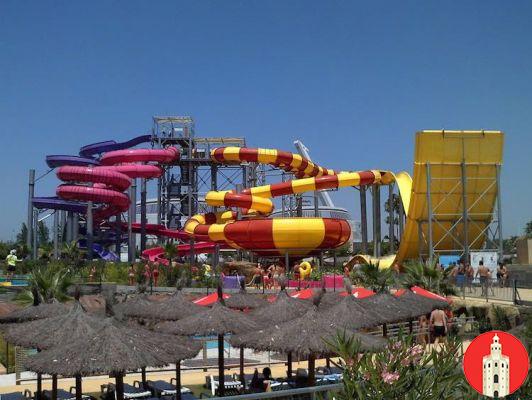 La first thematic area you meet is the one you find just entering the park. It is called Puerto de Indias and represents a port of the sixteenth century, from which one sets sail for the New World. Here there are also many dining options, bars, shops and everything you need to fully enter the mood of the park. But there is not only this, as there are also 4 attractions, which are among the most important in the park itself. Specifically we find, The challenge, which is a free fall from 68 meters high, The magic carousel, that is the carousel of horses for children, La Travesìa, which allows you to go around the park by ship, Las Carabellas, which is a real caravel.

After having finished all the attractions of the first area, we move to the Quetzal, which encompasses 6500 square meters: here is the area dedicated to the pre-Colombian civilization. There is a temple and a park ride, even if the attraction that strikes the most is the Ciklon, for true daredevils.

La third zoneinstead, it is the one called Puerta de America and here too there are four attractions: Anaconda, a roller coaster on the water with 3 jumps of 7, 12 and 16 meters, El tren de Potosi, a roller coaster for children, Sapo Saltón, another carousel for children, El Galeon. Furthermore, in this area there is the possibility to play different games of skill, to entertain oneself in various restaurants, shops and there is also a beautiful amphitheater that hosts a show in the evening.


Another very interesting area is Amazonia, where the distinctive sign is the luxuriant vegetation. Here is Iguazú, which is a large boat that simulates entering an erupting volcano. There are also other attractions such as El Jaguar, a classic roller coaster, Topetazú, a crash car designed especially for the little ones, and Las llamas, where llamas have to be mounted.

Then there is the Guarida de los pirates area, small but very fun, which joins the one called The Fountain of Youth, which gathers 5 attractions all for children. We are talking about the jumping frog, Crisalida, El caiman bailon, Tutti frutti and Rueda primavera. Here the little ones can let off steam, as this is the area dedicated to them.


From here, then, we reach the last area, which is called El Dorado. Here you will find other fun attractions such as Cinemoción, Dimension 4 and Capitan Balas, Rapidós de Orinoco, a 500-meter rafting, El vuelo de Halcón, a carousel with chains. In this area there are also the shows of the Circus of the Condor.

Useful information and how to get there and price

The park is open every day until 23pm, except Saturday, the day when it is closed in the afternoon. To know all the details, costs, discounts and so on, you must visit the official website of the park.

As for the admission price to Isla Magica in Seville, the rates are fixed and are:

Adult: 13 to 59 years
Children: 4 to 12 years
Senior citizens: from 60 years onwards they pay the same rate as children
Children under four years or less than one meter in height enter for free. 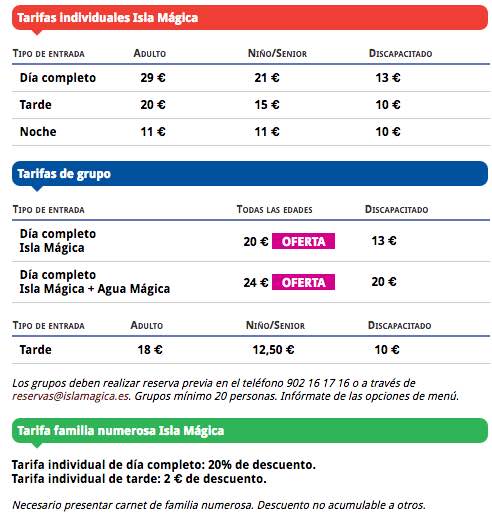 New Year and Christmas in Seville: the tradition in Spain

add a comment of Isla Magica Seville: info, prices and how to get there