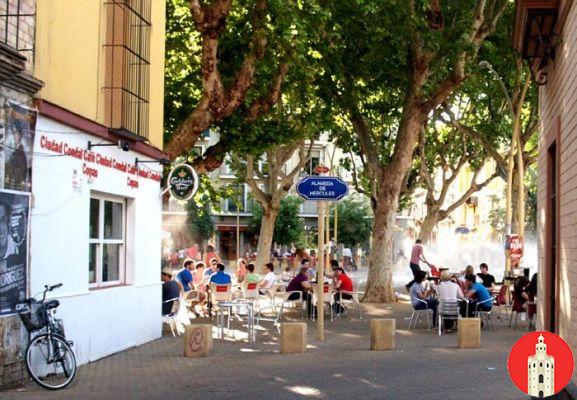 One of the busiest neighborhoods in Seville is definitely the Alameda de Hercules, which is a huge square in the center of the city that was embellished and built on behalf of the Count of Barjas in 1574. La Alameda is also recognized as the most ancient public garden of Spain and Europe. At the edge of the square, at the behest of the Count, two columns from the Roman Temple of Calle Marmoles were placed, then revised with the sculptures of Hercules and hence the name La Alameda de Hercules.

For many years between the early 70s and early 2000s the Alameda was home to a popular Sunday market, while during the evening it was frequented by young people due to the various clubs and restaurants in the area. This area is among the most alternative of Seville with a Bohemian air that certainly is not found anywhere else in the city.

A little history on the Alameda of Hercules in Seville

The origin of this district comes from an ancient channel of the Guadalquivir river which crossed the city center, entering right from the Alameda and ending in the area where today stands the Seville Cathedral. This canal moved west, thus allowing the city to develop into what is now its present form. According to an undocumented legend, it seems that Leovigildo was appointed to govern in 585 his son converted to Catholicism and proclaimed himself king of the city, putting himself in contrast with his father, and it was the latter who changed the route of the Guadalquivir cutting and blocking the passage of water trying to hinder the son.

The square was built, as previously mentioned in 1574, becoming the first public work of the city of Seville. Although Count Barjas had the area drained, the Alameda remained the most floodable area of ​​the city due to its proximity to the river and the low coast. In 1649, during the plague epidemic that hit the city of Seville, the Alameda square could only be crossed by boats.

In 1764, 1600 trees were planted and new fountains and two new columns made by Cayetano de Acosta representing two lions carrying a shield of the kingdom of Spain and that of the city of Seville. It was in this square that the Sevillians began to celebrate popular festivals such as the Semana Santa it's the same April Fair.


In 1885 a new fountain was built near the columns of the two lions, officially called as the Pila del Pato, it was then moved to the square of San Leandro.

For many years this area was neglected by the municipality of Seville, but then a new urban plan was created which saw in 2008 the renovation of the houses and the area, revalued and today very popular with young Sevillians.

Bars and Terraces Alameda in Hercules 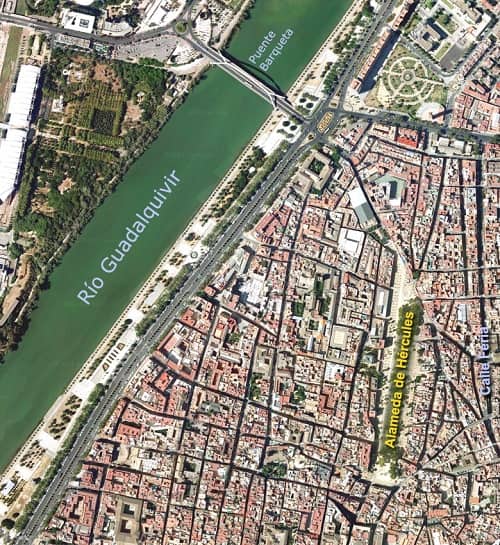 To date, the Alameda of Hercules is a dining and entertainment area, there are numerous bars and terraces where you can have beer and tapas. Also interesting is the nightlife with a series of discos and bars with music until late at night.